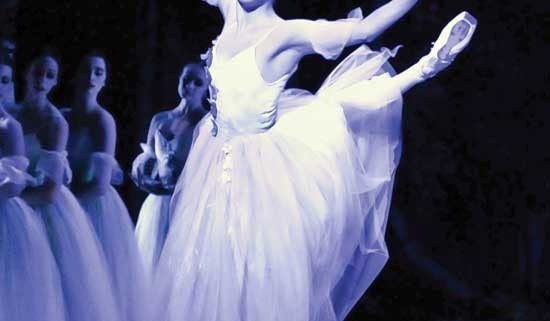 With five feet eight inches of svelte muscle, Pittsburgh Ballet Theatre principal Julia Erickson is celebrated for being quick on her feet and light in her carriage. Outside of Pennsylvania, though, she may be most well-known as the dancer who created Barre–A Real Food Bar with her husband, Aaron Ingley. The pair began selling the vegan whole-food energy bar in 2010 because Erickson got so many requests from colleagues who wanted to buy her homemade snacks. Today, the bars are carried by approximately 400 retailers across the country, including natural food outlets, dance studios and stores.
Erickson chose every ingredient based on snacks she eats in the studio—things like dates, nuts and rolled oats. “It has the perfect combination for me of slow- and fast-burning carbohydrates, protein, fiber and natural electrolyte replacement,” she says. “You’re not going to flame out, but it’s not going to make you feel overly full.” Erickson often snacks on half a Barre before a rehearsal to fuel her dancing and half immediately after to replace nutrients for her muscles.
Just as she is meticulous about what she puts in her body, Erickson also pays attention to how she challenges it. She practices yoga a few times a week to balance out the stress that dance places on her muscles and joints. “I like Bikram because it’s not super-intense on the upper body,” she says. “Mostly you are using your own body strength with calisthenics.” She also attends the less-familiar yin yoga, which focuses on stretching in one position, such as the half pigeon, for as much as five minutes at a time. “It really goes beyond the muscle to the connective tissue,” she says, “and I have found that it has been so helpful for me to even out the imbalances and asymmetries in my body.”
Throughout her day, Erickson works out knots with a small, hard ball for her feet and a large, softer ball on her quads and back. “Sometimes soft is surprisingly more effective than mashing on the muscle with something hard,” she says. Barre is currently seeking to expand its product line to include similar balls, as well as an all-natural dietary supplement and anti-inflammatory cream. The dancer-friendly items will soon be for sale at realfoodbarre.com.

Read the rest of the article here.

Are You Snacking Smart?

The American Dream by Ashley Rivers
Scroll to top